I hope everyone has some good plans for this evening.

For today’s chosen carol I have gone for a really upbeat one. I first came across this tune by hearing it on a Christmas album and it was played by Mike Oldfield. This carol is In Dulci Jubilo otherwise known as Good Christians all, rejoice.

Listen now to what we say,

ox and ass before him bow,

and he is in the manger now!

Hear the news of endless bliss,

Jesus Christ was born for this:

he has opened heaven’s door,

and we are blessed for evermore!

Christ was born for this;

Christ was born for this!

Now you need not fear the grave;

Jesus Christ was born to save:

come at his most gracious call

to find salvation, one and all!

Christ was born to save;

Christ was born to save!

Well 2020 is approaching fast, I must admit I cannot believe how fast 2019 has gone!

My chosen carol for today is Gabriel’s Message which is based on The Magnificat and is believed to have been composed in the 13th century.

The Angel Gabriel from heaven came,

his wings as drifted snow, his eyes as flame;

‘All hail,’ said he, ‘thou lowly maiden Mary,

‘For known a blessed Mother thou shalt be,

all generations laud and honour thee,

thy son shall be Emmanuel, by seers foretold;

‘To me be as it pleaseth God,’ she said,

‘My soul shall laud and magnify his holy name’:

Of her, Emmanuel, the Christ was born

in Bethlehem, all on a Christmas morn,

and Christian folk throughout the world will ever say

I hope everyone has had a nice weekend so far.

Here is the next Carol.

See, amid the winter’s snow

See, amid the winter’s snow,
Born for us on Earth below,
See, the tender Lamb appears,
Promised from eternal years.

Hail, thou ever blessed morn,
Hail redemption’s happy dawn,
Sing through all Jerusalem,
Christ is born in Bethlehem.

Lo, within a manger lies
He who built the starry skies;
He who, throned in height sublime,
Sits among the cherubim.

“As we watched at dead of night,
Lo, we saw a wondrous light:
Angels singing ‘Peace On Earth’
Told us of the Saviour’s birth.”

Sacred Infant, all divine,
What a tender love was Thine,
Thus to come from highest bliss
Down to such a world as this.

Teach, O teach us, Holy Child,
By Thy face so meek and mild,
Teach us to resemble Thee,
In Thy sweet humility.

As promised here is my post showing my Christmas presents with a book theme. Thankfully, I had quite a few books and a very groovy book light that I love.

Here are the books I received:-

The Carpet People by Terry Pratchett 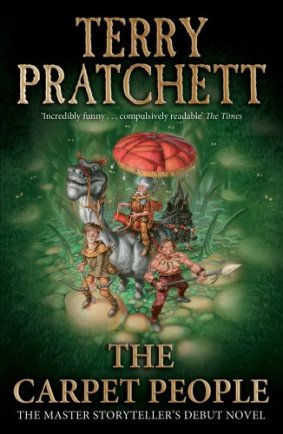 The Everyday Poet: Poems to Live By edited by Deborah Alma 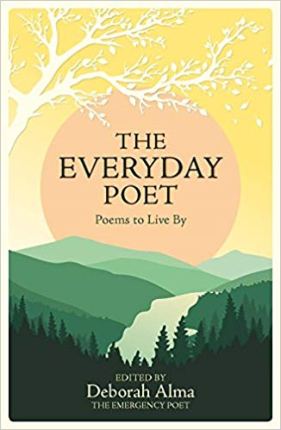 Be More Cat by Alison Davies

Then there is my amazing new light!

A lot of these books have been on my wish list for some time so I was really pleased to receive them. Drop me a comment with your thoughts.

This is another favourite of mine, that sadly is not sung much anymore. It is based on the Latin poem Corde natus by Aurelius Prudentius. It has been translated many times over the years and I have chosen my favourite translation.

Of the Father’s heart begotten

Of the Father’s heart begotten,
Ere the world from chaos rose,
He is Alpha, from that Fountain
All that is and hath been flows;
He is Omega, of all things,
Yet to come the mystic Close,
Evermore and evermore.

By His Word was all created
He commanded and ’twas done;
Earth and sky and boundless ocean,
Universe of three in one,
All that sees the moon’s soft radiance,
All that breathes beneath the sun,
Evermore and evermore.

He assumed this mortal body,
Frail and feeble, doomed to die,
That the race from dust created,
Might not perish utterly,
Which the dreadful Law had sentenced
In the depths of hell to lie,
Evermore and evermore.

O how blest that wondrous birthday,
When the Maid the curse retrieved,
Brought to birth mankind’s salvation
By the Holy Ghost conceived,
And the Babe, the world’s Redeemer
In her loving arms received,
Evermore and evermore.

This is He, whom seer and sibyl
Sang in ages long gone by,;
This is He of old revealed
In the page of prophecy;
Lo! He comes the promised Saviour;
Let the world his praises cry!
Evermore and evermore.

Hail! Thou Judge of souls departed;
Hail! of all the living King!
On the Father’s right hand throned,
Through his courts thy praises ring,
Till at last for all offences
Righteous judgement thou shalt bring,
Evermore and evermore.

Let the storm and summer sunshine,
Gliding stream and sounding shore,
Sea and forest, frost and zephyr,
Day and night their Lord alone;
Let creation join to laud thee
Through the ages evermore,
Evermore and evermore.

Time for another Carol.

My chosen carol today is Infant Holy. This carol is a Polish Christmas carol, it was translated into English in 1920 by Edith Margaret Gellibrand Reed (1885-1933).

For Hid bed a cattle stall;

Christ the Babe is Lord of all.

Christ the Babe is Lord of all.

Vigil till the morning new;

Tidings of a Gospel true.

Christ the Babe was born for you! 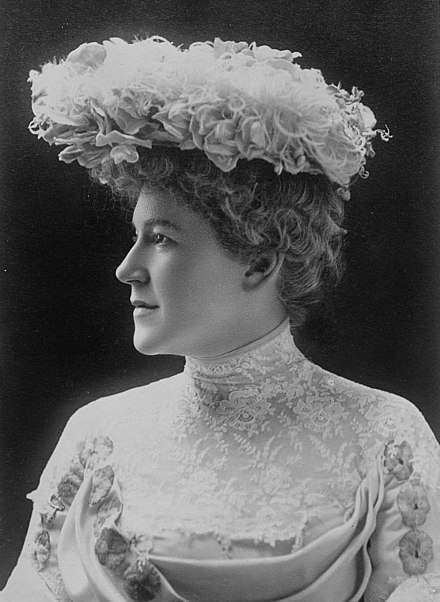 Yes, it is that time between Christmas and New Year where we have no clue what day of the week it is and living off leftovers and chocolate. I love it!

However, I have tried to be good and remembered it is Friday so I better do a poem. I have gone for a poem based on New Year.

What can be said in New Year rhymes,

That’s not been said a thousand times?

We know we dream, we dream we know.

We rise up laughing with the light,

We lie down weeping with the night.

We hug the world until it stings,

We curse it then and sigh for wings.

We wrestle our prides, we sheet our dead.

And that’s the burden of a year.

I hope everyone had a wonderful Christmas yesterday and a fantastic Boxing Day today.

I am pleased to say I have had quite a few books for Christmas, I will share more later in the week.

Here is my second carol of my Twelve Carols of Christmas. This is a personal favourite of mine but this year sadly was the first year my church did not sing it, since I have been there.

This is a 15th Century English carol but sadly I do not know who wrote the words.

by by, lully lullay.

how may we do

for to preserve this day

for whom we do sing

by by, lully lullay?

charged he hath this day

in his own sight,

all young children to slay.

That woe is me,

and ever morn and day,

neither say nor sing

by by, lully lullay!

by by, lully lullay,

I have decided to celebrate the Twelve Days of Christmas with a Christmas Carol each day. So here is my first Carol. This Carol is traditionally sung to the tune Sussex Carol, this tune is special to me because my husband and myself had it at our wedding, so this carol will always have a special place in my heart.

To hear the news the angels bring,

To hear the news the angels bring,

News of our merciful King’s birth.

Then why should we on earth be sad,

Since our Redeemer made us glad,

Then why should we on earth be so sad,

Since our Redeemer made us glad,

When from sin He set us free,

All for gain our liberty.

When sin departs before His grace,

Then life and health come in its place;

When sin departs before His grace,

Then life and health come in its place;

Angels and we with joy may sing,

All for to see the new-born King.

All out of darkness we have light,

Which made the angels sing this night;

All out of darkness we have light,

Which made the angels sing this night;

‘Glory to God and peace to men,

Now and for evermore. Amen.’ 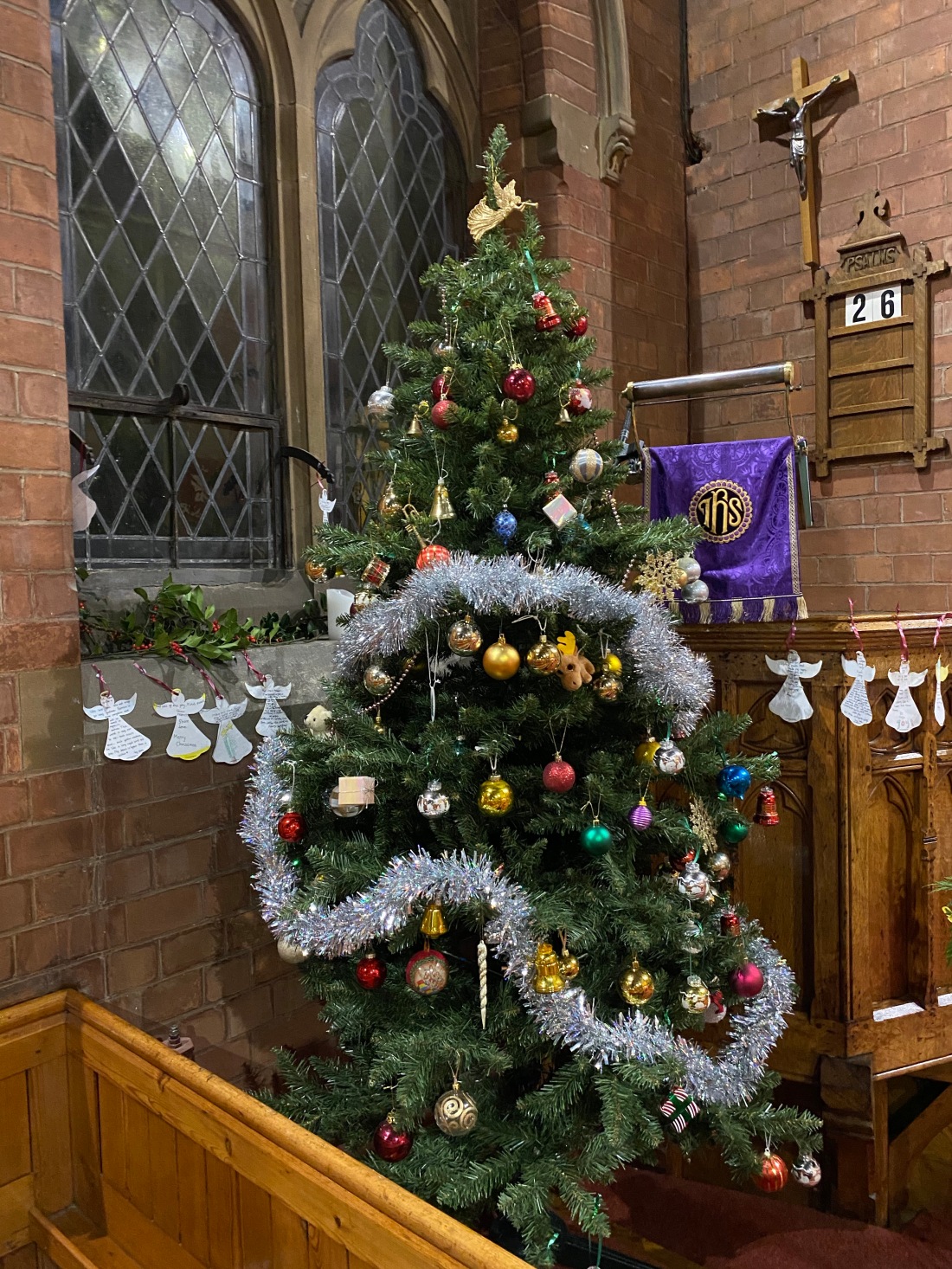 I hope everyone has a wonderful day today and you all get some wonderful bookish gifts.

I leave you with a carol that is always sang on Christmas morning.

Come and behold Him,

Born the King of angels:

Lo! He abhors not the Virgin’s womb;

Sing, all ye citizens of heaven above;

Jesus, to Thee be glory given;

Word of the Father,

p.s the picture is of the Christmas tree at the Church I play at.