Rosamunde Pilcher was born on the 22nd September 1924 in Cornwall. She began writing when she was 7 and published her first short story at the age of 15. From 1943 to 1946 she served with the Women’s Royal Naval Service. In 1946 she married her Graham Hope Pilcher and they moved to Dundee, Scotland together. In 1949 Pilcher’s first novel was published under the pseudonym Jane Fraser, she went on to publish a further ten novels under that name. In 1955 she published her first novel under her own name, by 1965 she had dropped the pseudonym entirely. Pilcher retired from writing in 2000, two years later she received her OBE.

Born in Colombo, Judith Dunbar spends her teenage years at boarding school, while her beloved mother and younger sister live abroad with her father.

When her new friend Loveday Carey-Lewis invites Judith home for the weekend to Nancherrow, the Carey-Lewises’ beautiful estate on the Cornish coast, it is love at first sight.

She falls in love too with the generous Carey-Lewises themselves. With their generosity and kindness, Judith grows from naive girl to confident young woman, basking in the warm affection of a surrogate family whose flame burns brightly. But it is a flame soon to be extinguished in the gathering storm of war. And Judith herself has far to travel before at last . . . coming home.

This book is just beautiful, I loved every moment of it and it has gone straight on my all time favourites list. It has been a long time since I have finished a book and immediately wanted to read it again. I just could not put it down and was worried it would be over too quickly so I actually started to pace myself.

The book is centred around Judith Dunbar and the reader is introduced to her when she is about to start boarding school. Her mother, father and younger sister Jess live abroad, hence why she is at boarding school and it is arranged she will spend the holidays with her aunt. Whilst at school Judith meets her lifelong friend Loveday and eventually meets her family. The book follows Judith’s life through the second world war and leaves Judith just after the war is over. As the book goes on we learn about the other characters in the book.

I was so excited to read this book as I remember watching the TV series with Joanna Lumley and a very young Keira Knightly when I was younger and just thinking how glamorous and beautiful everything was, so when I saw the book on Kindle for £1.99 I jumped at the chance to buy it. The book is even better than the TV series but I must admit the TV series is very close to the book and the actors were brilliantly matched up with their book equivalents. This book had me in tears at times, it made me laugh, it made me think and much more.

Judith is a very strong woman who has become strong due to the circumstances of her upbringing, Judith soon realises that her mother is not a strong woman and so she needs to take charge occasionally and help her mother. When her mother goes abroad to join her father Judith is left alone in a strange school and quickly has to make friends and adapt to her new environment. Meeting and befriending Loveday Carey-Lewis is a big help in this and when she goes to spend weekends and holidays with the Carey-Lewis family she has a place to call her own and a family who treat her as a daughter, she is loved and protected there but also stands on her own feet and remains independent.

We see Judith fall in love, mourn and see her take on the war. Pilcher shows WW2 in its truest form, she does not glamorise it and at times I found it hard to read about but I am pleased Pilcher kept it realistic. Throughout this book you see Pilcher’s life influencing the book, Pilcher lived in Cornwall and the book is mainly set in Cornwall, Pilcher also served in the war and so does Judith. These true experiences come through the book and makes it so believable to read.

One of my favourite characters other than Judith was Diana Carey-Lewis, she is so glamorous and elegant and lets nothing phase her. She seems like the perfect friend, mother and wife. I did not know whether I wanted to be her or be her best friend. I also really liked Edgar Carey-Lewis, he is the perfect gentleman and from a previous era, a gentle soul who is very shy.

The character I truly disliked was Judith’s father and I was very pleased he was not in the book very much. He was a selfish man and when Judith’s mother desperately wanted to go home to Judith and comfort her, he forbade it. He had no feelings towards his oldest daughter or his wife’s wellbeing, his wife clearly had a fragile mind and really did not want to be living abroad but he made her come back out there and live her life there. I found him very cold and heartless. Thankfully this was the only element I did not like about the book and it was only small.

This book is just over a thousand pages long as it follows a massive chunk of Judith’s life from early teenage years to mid twenties but I loved every page and it is an amazing read. Pilcher is now a favourite author and I am planning on which book to read next, I just hope it is as good as this one. The book is beautifully written and a joy to read, I highly recommend it to everyone and I award it a massive 5 Dragons out of 5. 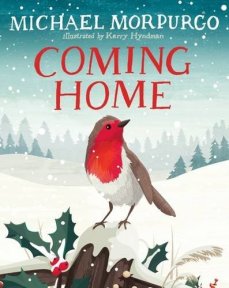 Michael Morpurgo has written over 130 books, many of them award winning. His best known work is War Horse which has also been turned into a stage play and a film. In 2003 he was made Children’s Laureate. He set up a charity with his wife called Farms for City Children and in 1999 he was awarded an MBE for his charitable work. In 2017 he was awarded a Knighthood for his charitable work and literature.

Hyndman has a degree in fine art from Newcastle University and an MA in Illustration from Kingston University. She now works as a freelance illustrator and map maker based in London. Hyndman is also an associate lecturer in Illustration at Goldsmiths University.

A plucky little robin sets out on an epic journey. Through dark forests, driving rain, clapping thunder and flashing lightning. Across frozen wastes, huge mountains and stormy seas he flies. And all the while he’s dreaming of home. Of her. But will he ever get there?

Another book off my Christmas reading list. This is my accidental find as I was trying to find another book called Coming Home but forgot the author’s name and so just typed in the title and this came up. I am so pleased I did find it as it was a beautiful book to read.

A very quick read for me but enjoyable, and the illustrations were excellent. This book is all about a robin’s flight home, through perilous conditions but all he thinks about is getting home to his mate.

This book is very short, even for a children’s book and to be honest a little scary, I was very worried about the little robin especially when he was attacked. I am not entirely sure a child would enjoy it in some places, unless they are made of stronger stuff than I.

The story is fast paced and Morpurgo’s use of language is simple but perfectly descriptive and rolls along. It made me want to say it out loud, it was so full of drama and had a rhythm to it, which is probably why I read it so quickly. I went back through it when I had finished it to truly enjoy and look at the illustrations. My favourite illustration is below, the details of the birds are just stunning, I would happily have it framed on my wall. 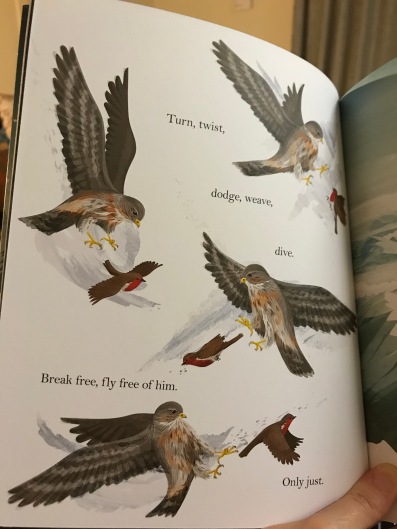 This book I rated 4 stars out of 5, it did not get the full 5 because it was just too short for me! I wanted more about the little robin. I leave you with another of my favourite pages. A beautiful read for both children and adults. 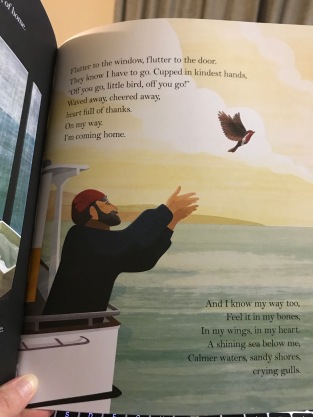 Happy Advent! Today is the first day of Advent and so the Christmas reading has begun.

I am very excited and I can not wait for tomorrow. I will see how my reading goes as I might add to the list as December goes on. The Christmas reading list runs from 1st December to 6th January when the Christmas decorations come down.

Christmas at the Beach Hut by Veronica Henry

I chose this one because I read a short story by Venronica Henry recently and really enjoyed it, so I thought I would try one of her Christmas books. 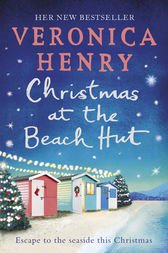 My best friend bought me this book for my birthday present and I have been saving it for my Christmas read. I am really excited about this as I absolutely adore Tolkien. 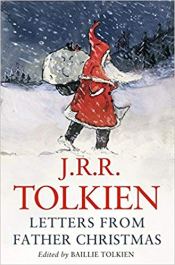 These books are my guilty pleasure, I think I have read them all apart from this one, as again I have been saving it for Christmas.

Not really a Christmas book I know but I could not resist. This book is so beautiful and special I just thought it was ideal for Christmas reading. Also the new Mary Poppins film Mary Poppins Returns is out soon and one of my saxophone students plays one of the children in the film, so I thought I had better read the book.

I am a bit of a Morpurgo fan and when I saw this book I had to have it. I do love children’s books they always make me smile and feel all warm and fuzzy inside. I found this book by complete accident as I was looking online for another book called Coming Home and this came up in the search. Hopefully it will be a lucky find. 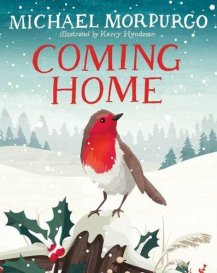 This was chosen quite simply because I have very fond memories of reading Mog stories to my neice and nephews. I have missed Mog so much I decided to buy this as a little treat to myself.

The Nutcracker by E. T. A. Hoffmann

Here is the big finale! As I have mentioned in a previous post I always read a new version of The Nutchracker on the run up to Christmas and here is my new copy. Another pretty book, I do love pretty books.

I would love to hear if anybody else has a Christmas reading list. Please feel free to post a link to your blog in the comments.