The Murder on the Links by Agatha Christie

An urgent cry for help brings Poirot to France. But he arrives too late to save his client, whose brutally stabbed body now lies face downwards in a shallow grave on a golf course.

But why is the dead man wearing his son’s overcoat? And who was the impassioned love-letter in the pocket for? Before Poirot can answer these questions, the case is turned upside down by the discovery of a second, identically murdered corpse . . .

This is the second full length Poirot novel I have read and I will be honest it kept me on my toes. This book is so full of red herrings I was never sure of who the murderer was until Poirot explained all at the end.

The more I read the Poirot stories the more I realise just how amazing he is and far better than the TV version. Poirot is funny, eccentric, cheeky and quite naughty at times. Hastings is his usual useless and silly self, always jumping to the wrong conclusions and getting into trouble.

In this book Poirot and Hastings rush off to France to help a man who has written begging for Poirot’s help as he believes his life is in danger. However, when they get there they realise that they are too late and instead of protecting someone they have a murder to solve instead.

Poirot has competition in the form of the young French detective Giraud. Giraud believes Poirot is a dinosaur and believes that Poirot will never solve the murder because his methods are old fashioned. Giraud rather amusingly spends most of the time on his hands and knees crawling around for clues and generally not finding them.

There are so many things that do not add up in this murder but Poirot uses his little grey cells to work them out and also finds time to sort out Hastings’ love life. I also loved how Poirot sometimes called himself Papa Poirot to Hastings.

I really enjoyed this book and I loved learning more about Poirot’s character but did find Hastings very annoying at times. Christie is so clever at writing a murder plot with so many different aspects you never see what is really happening until the end. I give this book 4 out of 5 Dragons. 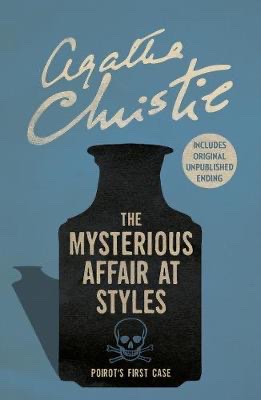 The Mysterious Affair at Style by Agatha Christie

Hercule Poirot is intrigued by the details surrounding the murder of wealthy Mrs Inglethorp, mistress of Styles Court. This was Agatha Christie’s first Poirot novel, published in 1921.

I was pleased to see that Hastings was his usual bumbling self who is always wrong but convinced that he is right and that Poirot is wrong and going senile in his old age. He really made me laugh in this book and his random outbursts were hilarious.

Poirot was a massive surprise and I absolutely adored him. He is so eccentric and you never know what he is going to do next. My favourite scene has got to be where he goes off skipping with joy down the lawn. He is a truly brilliant character which is ten times better in the book than on the screen.

I really enjoyed the story and it really kept me on my toes because once I thought I had worked out who the murderer was I got it completely wrong and the story went in a different direction. We also got a glimpse of the famous Inspector Japp and although we didn’t see much of him it was a good introduction that I am sure we will see more of.

The edition of the book I read also had the original ending that Christie had written as well as the one published and I must admit after reading both I much prefer the one that is published rather than the one Christie originally planned. The two endings are very good but I really like where Poirot and Hastings sit down and sum everything up and talk over the case at the end of the published ending.

This is my first full length Christie novel and it will definitely not be my last and I give this book 4 out of 5 Dragons. I just loved all the twists and turns and Poirot’s bright green eyes.