1. The Man in the Iron Mask by Alexandre Dumas

In the dark recesses of the Bastille, a young prisoner known only as Phillipe has spent eight years of his short life. When Aramis, posing as his confessor, bribes his way into the prison, the truth about the man’s identity is brought to light. It is a secret which, if revealed, could bring down the King of France, Louis XIV, whose corrupt rule is destroying the well-being of his country.

The ensuing jailbreak and the consequent struggle for power brings the musketeers into swashbuckling action, taking us back to the days of chivalry and making The Man in the Iron Mask one of the most enthralling historical romances in literature.

I have read The Three Musketeers many, many times and I would like to read The Man in The Iron Mask so it will stay on the list.

2. North and South by Elizabeth Gaskell

When her father leaves the Church in a crisis of conscience, Margaret Hale is uprooted from her comfortable home in Hampshire to move with her family to the north of England. Initially repulsed by the ugliness of her new surroundings in the industrial town of Milton, Margaret becomes aware of the poverty and suffering of the local mill workers and develops a passionate sense of social justice. This is intensified by her tempestuous relationship with the mill-owner and self-made man, John Thornton, as their fierce opposition over his treatment of his employees masks a deeper attraction.

In North and South, Elizabeth Gaskell skillfully fuses individual feeling with social concern, and in Margaret Hale creates one of the most original heroines of Victorian literature.

Another classic I really should read and actually own two copies of. This has been on the list since I started Goodreads in 2012, I will keep it on the list for a little longer.

3. The House of Hades by Rick Riordan

Hazel stands at a crossroads. She and the remaining crew of the Argo II could return home with the Athena Parthenos statue and try to stop Camp Half-Blood and Camp Jupiter from going to war. Or they could continue their quest to find the House of Hades, where they might be able to open the Doors of Death, rescue their friends Percy and Annabeth from Tartarus, and prevent monsters from being reincarnated in the mortal world. Whichever road they decide to take, they have to hurry, because time is running out. Gaea, the bloodthirsty Earth Mother, has set the date of August 1 for her rise to power.

Annabeth and Percy are overwhelmed. How will the two of them make it through Tartarus? Starving, thirsty, and in pain, they are barely able to stumble on in the dark and poisonous landscape that holds new horrors at every turn. They have no way of locating the Doors of Death. Even if they did, a legion of Gaea’s strongest monsters guards the Doors on the Tartarus side. Annabeth and Percy can’t exactly launch a frontal assault.

Despite the terrible odds, Hazel, Annabeth, Percy, and the other demigods of the prophecy know that there is only one choice: to attempt the impossible. Not just for themselves, but for everyone they love. Even though love can be the riskiest choice of all.

Join the demigods as they face their biggest challenges yet in The House of Hades, the hair-raising penultimate book in the best-selling Heroes of Olympus series.

When orphaned 11-year-old Pollyanna comes to live with austere and wealthy Aunt Polly, her philosophy of gladness brings happiness to her aunt and other members of the community, somewhat to their surprise.

This is another book I am desperate to read, I am a little obsessed with the TV Film of it starring Amanda Burton. I hope the book does not disappoint.

5. The White Princess by Philippa Gregory 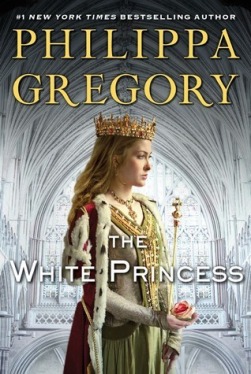 Caught between loyalties, the mother of the Tudors must choose between the red rose and the white.

When Henry Tudor picks up the crown of England from the mud of Bosworth field, he knows he must marry the princess of the enemy house—Elizabeth of York—to unify a country divided by war for nearly two decades.

But his bride is still in love with his slain enemy, Richard III—and her mother and half of England dream of a missing heir, sent into the unknown by the White Queen. While the new monarchy can win power, it cannot win hearts in an England that plots for the triumphant return of the House of York.

Henry’s greatest fear is that somewhere a prince is waiting to invade and reclaim the throne. When a young man who would be king leads his army and invades England, Elizabeth has to choose between the new husband she is coming to love and the boy who claims to be her beloved lost brother: the rose of York come home at last.

Being as I do own this book I intend on reading it at some point as I have read most of the books by Philippa Gregory.

So that is my first foray into the TBR list, I have only braved 5 books this week, I will try 10 next week. I have also only managed to remove 1 book so the list has gone from 499 to 498, I feel a little bit like a failure.

If anybody else is doing the Down The TBR Hole I would love to hear about it, please leave the link to your blog in the comments.