Another venture into the world of the TBR pile. 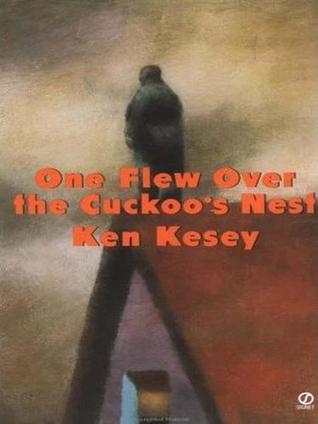 Tyrannical Nurse Ratched rules her ward in an Oregon State mental hospital with a strict and unbending routine, unopposed by her patients, who remain cowed by mind-numbing medication and the threat of electric shock therapy. But her regime is disrupted by the arrival of McMurphy – the swaggering, fun-loving trickster with a devilish grin who resolves to oppose her rules on behalf of his fellow inmates. His struggle is seen through the eyes of Chief Bromden, a seemingly mute half-Indian patient who understands McMurphy’s heroic attempt to do battle with the powers that keep them imprisoned. Ken Kesey’s extraordinary first novel is an exuberant, ribald and devastatingly honest portrayal of the boundaries between sanity and madness.

I am ashamed to say that this is another classic I have never read and for that reason alone it is staying on the TBR shelf and hopefully I get around to reading it soon.

2. The Princess Diaries by Meg Cabot 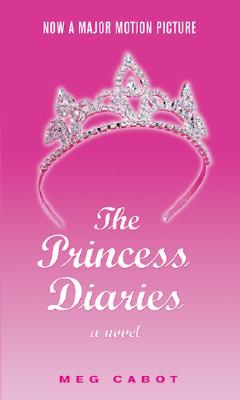 Mia Thermopolis is pretty sure there’s nothing worse than being a five-foot-nine, flat-chested freshman, who also happens to be flunking Algebra. Is she ever in for a surprise.

First Mom announces that she’s dating Mia’s Algebra teacher. Then Dad has to go and reveal that he is the crown prince of Genovia. And guess who still doesn’t have a date for the Cultural Diversity Dance?

The Princess Diaries is the first book in the beloved, bestselling series that inspired the feature film starring Anne Hathaway and Julie Andrews.

I remeber putting this book on the list because I absolutely loved the film, but that was in 2013 and thinking about it now I do not really want to read the book and I will stick with the film version for now.

3. The Gathering Storm by Robert Jordan and Brandon Sanderson 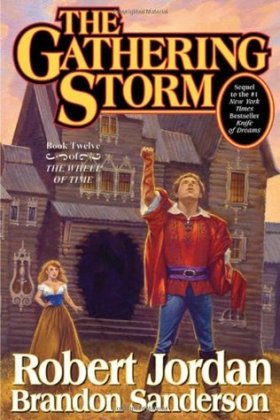 Since its debut in 1990, The Wheel of Time(R) by Robert Jordan has captivated millions of readers around the globe with its scope, originality, and compelling characters.

Tarmon Gai’don, the Last Battle, looms. And mankind is not ready.

The final volume of the Wheel of Time, A Memory of Light, was partially written by Robert Jordan before his untimely passing in 2007. Brandon Sanderson, New York Times bestselling author of the Mistborn books, and now Stormlight Archive, among others, was chosen by Jordan’s editor–his wife, Harriet McDougal–to complete the final volume, later expanded to three books.

In this epic novel, Robert Jordan’s international bestselling series begins its dramatic conclusion. Rand al’Thor, the Dragon Reborn, struggles to unite a fractured network of kingdoms and alliances in preparation for the Last Battle. As he attempts to halt the Seanchan encroachment northward–wishing he could form at least a temporary truce with the invaders–his allies watch in terror the shadow that seems to be growing within the heart of the Dragon Reborn himself.

Egwene al’Vere, the Amyrlin Seat of the rebel Aes Sedai, is a captive of the White Tower and subject to the whims of their tyrannical leader. As days tick toward the Seanchan attack she knows is imminent, Egwene works to hold together the disparate factions of Aes Sedai while providing leadership in the face of increasing uncertainty and despair. Her fight will prove the mettle of the Aes Sedai, and her conflict will decide the future of the White Tower–and possibly the world itself.

Wow, this series is huge. I have tried twice to get into this series and given up hope on book 4. My brother-inlaw and my cousin keep telling me to push through as it gets better but I don’t think I will manage it so sadly this is leaving the TBR pile.

4. Towers of Midnight by Robert Jordan and Brandon Sanderson 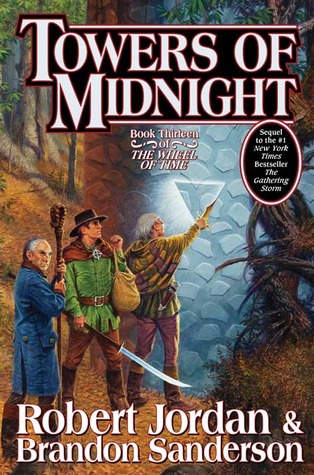 The Last Battle has started. The seals on the Dark One’s prison are crumbling. The Pattern itself is unraveling, and the armies of the Shadow have begun to boil out of the Blight.

The sun has begun to set upon the Third Age.

Perrin Aybara is now hunted by specters from his past: Whitecloaks, a slayer of wolves, and the responsibilities of leadership. All the while, an unseen foe is slowly pulling a noose tight around his neck. To prevail, he must seek answers in Tel’aran’rhiod and find a way–at long last–to master the wolf within him or lose himself to it forever

Meanwhile, Matrim Cauthon prepares for the most difficult challenge of his life. The creatures beyond the stone gateways–the Aelfinn and the Eelfinn–have confused him, taunted him, and left him hanged, his memory stuffed with bits and pieces of other men’s lives. He had hoped that his last confrontation with them would be the end of it, but the Wheel weaves as the Wheel wills. The time is coming when he will again have to dance with the Snakes and the Foxes, playing a game that cannot be won. The Tower of Ghenjei awaits, and its secrets will reveal the fate of a friend long lost.

For the same reason as the above this is also leaving the list.

5. Lord of Chaos by Robert Jordan

In this sequel to the phenomenal New York Times bestseller The Fires of Heaven, we plunge again into Robert Jordan’s extraordinarily rich, totally unforgettable world:

On the slopes of Shayol Ghul, the Myrddraal swords are forged, and the sky is not the sky of this world …

In Salidar the White Tower in exile prepares an embassy to Caemlyn, where Rand Al’Thor, the Dragon Reborn, holds the throne — and where an unexpected visitor may change the world …

In Emond’s Field, Perrin Goldeneyes, Lord of the Two Rivers, feels the pull of ta’veren to ta’veren and prepares to march …

Morgase of Caemlyn finds a most unexpected, and quite unwelcome, ally …

Same reason as above it is going.

Another five books done and 4 out of the 5 have gone. I am quite pleased with result and slowly but surely the TBR pile is going down.

I would love to hear if you have read any of these books and your thoughts on them. Also if you are also doing the Down the TBR Hole challenge please drop me the link to your blog and I will head over and give it a read.