Another attempt to whittle down the TBR pile. Sadly reading is not going well at the moment due to work and tiredness but still hoping to make a dent in the TBR pile.

1. A Crown of Swords by Robert Jordan

Elayne, Aviendha, and Mat come ever closer to the bowl ter’angreal that may reverse the world’s endless heat wave and restore natural weather. Egwene begins to gather all manner of women who can channel–Sea Folk, Windfinders, Wise Ones, and some surprising others. And above all, Rand faces the dread Forsaken Sammael, in the shadows of Shadar Logoth, where the blood-hungry mist, Mashadar, waits for prey.

Another Wheel of Time novel, and sadly I still do not think I will get into reading this series so sadly it will have to go.

2. The Path of Daggers by Robert Jordan

The Seanchan invasion force is in possession of Ebou Dar. Nynaeve, Elayne, and Aviendha head for Caemlyn and Elayne’s rightful throne, but on the way they discover an enemy much worse than the Seanchan.

In Illian, Rand vows to throw the Seanchan back as he did once before. But signs of madness are appearing among the Asha’man.

In Ghealdan, Perrin faces the intrigues of Whitecloaks, Seanchan invaders, the scattered Shaido Aiel, and the Prophet himself. Perrin’s beloved wife, Faile, may pay with her life, and Perrin himself may have to destroy his soul to save her.

Meanwhile the rebel Aes Sedai under their young Amyrlin, Egwene al’Vere, face an army that intends to keep them away from the White Tower. But Egwene is determined to unseat the usurper Elaida and reunite the Aes Sedai. She does not yet understand the price that others—and she herself—will pay.

For the same reason as above, this one is on the go list. 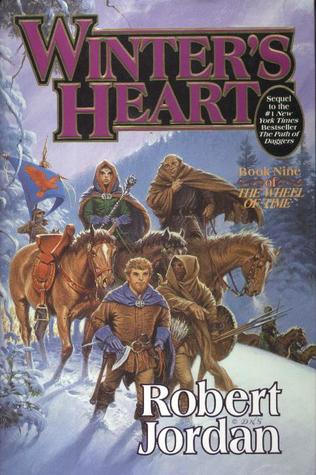 Rand is on the run with Min, and in Cairhein, Cadsuane is trying to figure out where he is headed. Rand’s destination is, in fact, one she has never considered.

Mazrim Taim, leader of the Black Tower, is revealed to be a liar. But what is he up to?

Faile, with the Aiel Maidens, Bain and Chiad, and her companions, Queen Alliandre and Morgase, is prisoner of Savanna’s sept.

Perrin is desperately searching for Faile. With Elyas Machera, Berelain, the Prophet and a very mixed “army” of disparate forces, he is moving through country rife with bandits and roving Seanchan. The Forsaken are ever more present, and united, and the man called Slayer stalks Tel’aran’rhiod and the wolfdream.

In Ebou Dar, the Seanchan princess known as Daughter of the Nine Moons arrives–and Mat, who had been recuperating in the Tarasin Palace, is introduced to her. Will the marriage that has been foretold come about?

There are neither beginnings or endings to the turning of the Wheel of Time. But it is a beginning….

It would appear I have the whole series on the TBR list so this will take a while to remove them all. At least my TBR list will be drastically smaller at the end of it.

4. Knife of Dreams by Robert Jordan 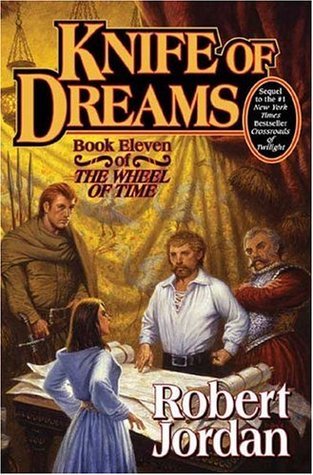 The dead are walking, men die impossible deaths, and it seems as though reality itself has become unstable: All are signs of the imminence of Tarmon Gai’don, the Last Battle, when Rand al’Thor, the Dragon Reborn, must confront the Dark One as humanity’s only hope. But Rand dares not fight until he possesses all the surviving seals on the Dark One’s prison and has dealt with the Seanchan, who threaten to overrun all nations this side of the Aryth Ocean and increasingly seem too entrenched to be fought off. But his attempt to make a truce with the Seanchan is shadowed by treachery that may cost him everything. Whatever the price, though, he must have that truce. And he faces other dangers.

The winds of time have become a storm, and things that everyone believes are fixed in place forever are changing before their eyes. Even the White Tower itself is no longer a place of safety. Now Rand, Perrin and Mat, Egwene and Elayne, Nynaeve and Lan, and even Loial, must ride those storm winds, or the Dark One will triumph.

5. Crossroads of Twilight by Robert Jordan

In the tenth book of The Wheel of Time from the New York Times#1 bestselling author Robert Jordan, the world and the characters stand at a crossroads, and the world approaches twilight, when the power of the Shadow grows stronger.

Fleeing from Ebou Dar with the kidnapped Daughter of the Nine Moons, whom he is fated to marry, Mat Cauthon learns that he can neither keep her nor let her go, not in safety for either of them, for both the Shadow and the might of the Seanchan Empire are in deadly pursuit.

Perrin Aybara seeks to free his wife, Faile, a captive of the Shaido, but his only hope may be an alliance with the enemy. Can he remain true to his friend Rand and to himself? For his love of Faile, Perrin is willing to sell his soul.

At Tar Valon, Egwene al’Vere, the young Amyrlin of the rebel Aes Sedai, lays siege to the heart of Aes Sedai power, but she must win quickly, with as little bloodshed as possible, for unless the Aes Sedai are reunited, only the male Asha’man will remain to defend the world against the Dark One, and nothing can hold the Asha’man themselves back from total power except the Aes Sedai and a unified White Tower.

In Andor, Elayne Trakland fights for the Lion Throne that is hers by right, but enemies and Darkfriends surround her, plotting her destruction. If she fails, Andor may fall to the Shadow, and the Dragon Reborn with it.

Rand al’Thor, the Dragon Reborn himself, has cleansed the Dark One’s taint from the male half of the True Source, and everything has changed. Yet nothing has, for only men who can channel believe that saidin is clean again, and a man who can channel is still hated and feared-even one prophesied to save the world. Now, Rand must gamble again, with himself at stake, and he cannot be sure which of his allies are really enemies.

6. A Memory of Light by Robert Jordan and Brandon Sanderson

When Robert Jordan died in 2007, all feared that these concluding scenes would never be written. But working from notes and partials left by Jordan, established fantasy writer Brandon Sanderson stepped in to complete the masterwork. With The Gathering Storm (Book 12) and Towers of Midnight (Book 13) behind him, both of which were # 1 New York Times hardcover bestsellers, Sanderson now re-creates the vision that Robert Jordan left behind.

The Wheel of Time turns, and Ages come and pass.
What was, what will be, and what is,
may yet fall under the Shadow.
Let the Dragon ride again on the winds of time.

Anne Rice returns to the mesmerizing storytelling that has captivated readers for more than three decades in a tale of unceasing suspense set in time past—a metaphysical thriller about angels and assassins.

The novel opens in the present. At its center: Toby O’Dare—a contract killer of underground fame on assignment to kill once again. A soulless soul, a dead man walking, he lives under a series of aliases—just now: Lucky the Fox—and takes his orders from “The Right Man.”

Into O’Dare’s nightmarish world of lone and lethal missions comes a mysterious stranger, a seraph, who offers him a chance to save rather than destroy lives. O’Dare, who long ago dreamt of being a priest but instead came to embody danger and violence, seizes his chance. Now he is carried back through the ages to thirteenth-century England, to dark realms where accusations of ritual murder have been made against Jews, where children suddenly die or disappear . . . In this primitive setting, O’Dare begins his perilous quest for salvation, a journey of danger and flight, loyalty and betrayal, selflessness and love.

I absolutely love Anne Rice and have read almost all of her Vampire Lestat books so this will definitely be staying on the list.

Beautiful Sylvia Kaye and another young woman had been seen hitching a ride not long before Sylvia’s bludgeoned body is found outside a pub in Woodstock, near Oxford. Morse is sure the other hitchhiker can tell him much of what he needs to know. But his confidence is shaken by the cool inscrutability of the girl he’s certain was Sylvia’s companion on that ill-fated September evening. Shrewd as Morse is, he’s also distracted by the complex scenarios that the murder set in motion among Sylvia’s girlfriends and their Oxford playmates. To grasp the painful truth, and act upon it, requires from Morse the last atom of his professional discipline.

I’ve always wanted to read the Inspector Morse novels so this has to stay on the TBR list as well.

One of the most significant and intriguing Gothic novels of the Victorian period and is enjoyed today as a modern psychological thriller. In UNCLE SILAS (1864) Le Fanu brought up to date Mrs Radcliffe’s earlier tales of virtue imprisoned and menaced by unscrupulous schemers. The narrator, Maud Ruthyn, is a 17 year old orphan left in the care of her fearful uncle, Silas. Together with his boorish son and a sinister French governess, Silas plots to kill Maud and claim her fortune. The novel established Le Fanu as a master of horror fiction.

Another book that I have owned for years but never read, so I will keep it on the list for a little while longer.

10. Moby Dick or, The Whale by Herman Melville

So Melville wrote of his masterpiece, one of the greatest works of imagination in literary history. In part, Moby-Dick is the story of an eerily compelling madman pursuing an unholy war against a creature as vast and dangerous and unknowable as the sea itself. But more than just a novel of adventure, more than an encyclopaedia of whaling lore and legend, the book can be seen as part of its author’s lifelong meditation on America. Written with wonderfully redemptive humour, Moby-Dick is also a profound inquiry into character, faith, and the nature of perception.

Another book I ashamed to say I have never read but do own. Therefore it is another book to stay on the list.

Wow, I managed to get through ten books today I am very happy. Six books have been removed and four books have stayed, the list is gradually getting smaller.

If you are also doing the Down the TBR Hole then please drop me the link in the comments and I will go and have a read and will give you a follow.