The Confessions of Frannie Langton by Sara Collins 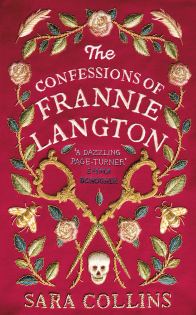 Sara Collins studied Law at the London School of Economics and worked as a lawyer for seventeen years. In 2014 she embarked upon the Creative Writing Masters at Cambridge University, where she won the 2015 Michael Holroyd Prize for Recreative Writing and was shortlisted for the 2016 Lucy Cavendish Prize for a book inspired by her love of Gothic Fiction. This turned into her first novel, The Confessions of Frannie Langton.

1826, and all of London is in a frenzy. Crowds gather at the gates of the Old Bailey to watch as Frannie Langton, maid to Mr and Mrs Benham, goes on trial for their murder. The testimonies against her are damning – slave, whore, seductress. And they may be the truth. But they are not the whole truth.

For the first time Frannie must tell her story. It begins with a girl learning to read on a plantation in Jamaica, and it ends in a grand house in London, where a beautiful woman waits to be freed.

But through her fevered confessions, one burning question haunts Frannie Langton: could she have murdered the only person she ever loved?

I must admit I was really excited to get this book and read it after seeing it on Facebook with rave reviews. I was also really pleased to get a signed copy from Waterstones. So it was moved to the top of my TBR pile. Sadly, I was very disappointed.

I found this book really annoying, when I first started it I was happily reading away, however it then began to get on my nerves and I was reluctant to keep going. I even stopped reading it for about a week but did return because I wanted to know what happened at the end.

I’m not entirely sure what it was that got on my nerves so much but I think it was the writing style. It just made me reluctant to pick the book up and read it. I also did not like the fact that the blurb pointed that there would be more of a trial being featured and sadly there was hardly any of the trial in the story, it just felt like an afterthought added at the end.

This book includes many themes, slavery, drug abuse, abuse, depression and much more and I think overall there are too many themes covered and it makes the story murky. I also found that certain elements of the story were highly predictable and that made it rather dull to read at times.

Overall, I felt no sympathy for the characters especially Frannie and some of them really got on my nerves, mainly Madame. I felt no real love for the story and will not be reading it again. Most people I am sure will enjoy this book but sadly it was just not my cup of tea. I have given this book 2 out of 5 Dragons.