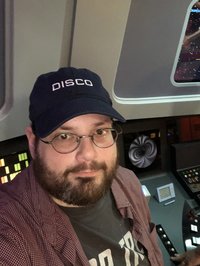 Dave Galanter has authored various Star Trek projects, including Voyager: Battle Lines, The Next Generation duology Maximum Warp, and The Original Series novels Troublesome Minds and Crisis of Consciousness, as well as numerous works of Star Trek short fiction. He lives in Maryland with his wife and family.

The U.S.S. Discovery’s specialty is using its spore-based hub drive to jump great distances faster than any warp-faring vessel in Starfleet. To do this, Lieutenant Paul Stamets navigates the ship through the recently revealed mycelial network, a subspace domain Discovery can briefly transit but in which it cannot remain. After responding to a startling distress call originating from within the network, the Discovery crew find themselves trapped in an inescapable realm where they will surely perish unless their missing mycelial fuel is found or restored. Is the seemingly human man found alone and alive inside the network the Starfleet officer he claims to be, or an impostor created by alien intruders who hope to extract themselves from the mycelial plane at the expense of all lives aboard Discovery?

I must admit after the disappointment of The Enterprise War I was thrilled to read this book and could not put it down. I loved the characters and most of all I loved the humorous interactions.

The first thing I really enjoyed was that this novel had scenes for the lesser seen characters like Airiam, Bryce, Pollard and Landry. I particularly liked a beautiful scene between Landry and Airiam. In fact it was wonderful all round to learn more about Airiam’s character. I also found Dr Pollard highly amusing.

The main thing I enjoyed was the development of Stamets’ character through the story though. He started off his usual grumpy, rude self but as the story went through he mellowed, he became thoughtful, caring and funny and less work obsessed. I also loved the friendship between Tilly and Stamets; it was like a perfect brother and sister relationship.

My favourite character though was Ephraim. Ephraim is such a mystery but also very adorable but I won’t say anymore as I don’t want to spoil the surprise.

There is also a surprise new species in the story who were very intriguing and fun.

Fun to be honest is the best way to describe this book, it really made me smile and laugh out loud. I loved this book and highly recommend it, that is why I have given it 5 out of 5 Dragons.