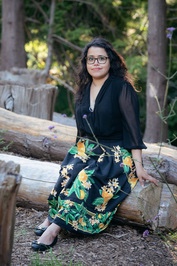 Silvia Moreno-Garcia is the author of several novels, including Gods of Jade and Shadow. She has also edited a number of anthologies, including the World Fantasy Award-winning She Walks in Shadows (a.k.a. Cthulhu’s Daughters). Mexican by birth, Canadian by inclination.

After receiving a frantic letter from her newlywed cousin begging for someone to save her from a mysterious doom, Noemí Taboada heads to High Place, a distant house in the Mexican countryside. She’s not sure what she will find – her cousin’s husband, a handsome Englishman, is a stranger, and Noemí knows little about the region.

Noemí is also an unlikely rescuer: She’s a glamorous debutante, and her chic gowns and perfect red lipstick are more suited for cocktail parties than amateur sleuthing. But she’s also tough and smart, with an indomitable will, and she is not afraid: not of her cousin’s new husband, who is both menacing and alluring; not of his father, the ancient patriarch who seems to be fascinated by Noemí; and not even of the house itself, which begins to invade Noemi’s dreams with visions of blood and doom.

Her only ally in this inhospitable abode is the family’s youngest son. Shy and gentle, he seems to want to help Noemí but might also be hiding dark knowledge of his family’s past. For there are many secrets behind the walls of High Place. The family’s once colossal wealth and faded mining empire kept them from prying eyes, but as Noemí digs deeper she unearths stories of violence and madness.

And Noemí, mesmerized by the terrifying yet seductive world of High Place, may soon find it impossible to ever leave this enigmatic house behind.

I have seen so many reviews of this book and it has featured on my instagram account a great deal so I thought it was high time I gave it a read. Thankfully I was not disappointed.

The first few chapters of the book I will be honest had me slightly worried as it seemed to be heading down a predictable route and to a certain extent it was what I was predicting but with a twist and I’m so pleased I read it till the end.

Neomi is a true socialite who is used to getting her own way in the world. She has her father wrapped around her little finger and she knows how to get a man to do anything for her. She is beautiful and stylish but no simpleton, she is highly educated and I love the fact she has so many opportunities to show her knowledge.

Francis is such a sweetie all he wants to do is help Neomi but he is constrained by his family. He’s so shy and has clearly led a very sheltered life, he has never met a woman like Neomi before in his life and it is clear he finds her fascinating. I really loved Francis’ character and loved getting to know his character.

High Place is a mystery and a mouldy one at that, it really sounds like a nightmare to live in but the people who call it home do not seem to mind the state of place but Neomi notices it. The mould on the walls, the lack of reliable electricity and hot water and the fact that the curtains remain closed can not help the situation. It really must be a dismal place to live and seems like something from a gothic novel to Neomi.

The character I did not like was Virgil as he was clearly a bully and a very slimy character. He is described as handsome but his character does not reflect that. Florence, Francis’ mother, is also a nasty lady but at the same time I felt sorry for her. Florence clearly tried to change her future and clearly had a happier past but now she is a different woman left with broken dreams. You see snippets of this through the book.

I really enjoyed reading this book, oh and I love the cover of the book. I know I shouldn’t judge a book by its cover but the cover really is eye catching. The storyline for this book is brilliantly written and cleverly thought out. I will definitely be reading Moreno-Garcia’s other books. I give this book 4 out 5 Dragons.