I hope everyone is having a nice day so far.

Here is what I have been up to on the blog this week.

Really enjoying this book so far. Shardlake is such a good character and the way he works out how the crimes were committed is fascinating.

I hope everyone has a wonderful week.

I hope everyone has some good weekend plans. This Easter we can see friends and family outside so today we visited my parents which was nice. Last Easter we could not meet at all, so being able to visit each other outside is a move forward. Tomorrow I am also playing for two Easter services which is another improvement on last year where the churches were also closed. Small steps to normality are happening.

I must admit I am little nervous about playing the organ tomorrow, I am rather out of practice playing in front of people but hopefully it goes well. After church tomorrow it will hopefully be a nice home cooked meal and then relaxing with a few Easter chocolates and a nice drink or two.

Monday, for us will be another day of relaxation before it is back to normality on Tuesday. Hopefully, I will get some reading in over the weekend as well because my current read Dark Fire by C. J. Sansom is excellent and I can’t put it down, my husband is also desperate to read it as well so I need to finish it fast.

What is everyone reading over this weekend?

I hope everyone has a good Easter weekend planned with a lot of Easter eggs and yummy food involved.

My chosen poem this week is by Robert Browning who wrote this poem whilst he was travelling around Italy in 1845. Browning was writing about his nostalgia for England.

March was a better month for me reading wise, which was good, but I fear April will not be so good due to assignments again but I live in hope.

14/70 Goodreads Challenge. Now 3 books behind, really need to work on catching up.

So there is March. Please drop me a comment if you want to chat. 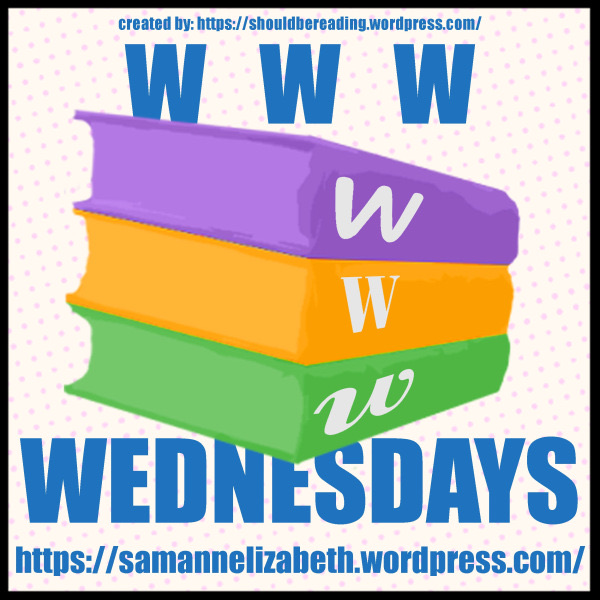 WWW Wednesday is a meme hosted by Sam at Taking on a World of Words.

The rules are answer the questions below and share a link to your blog in the comments section of Sam’s blog.

Half way through the week already! I hope everyone is having a good week so far.

So here is what I have been up to reading this week.

What I am Currently Reading

I just started this last night so I’m not very far in yet. Hopefully, it will be as good as the first in the series.

What I have Recently Finished Reading

This was an OK read but it was unusually predictable for Christie. Review.

What I Think I will Read Next

As usual I am never sure what I will read next but it will most likely be one of the above.

So there is my WWW Wednesday. Please drop me a comment with your WWW Wednesday and I will head over for a visit.

The Secret Adversary by Agatha Christie

Tommy and Tuppence, two young people flat broke and out of work, are restless for excitement. They embark on a daring business scheme- Young Adventurers Ltd- ‘willing to do anything, go anywhere’.

Their first assignment, for the sinister Mr Whittington, draws them into a diabolical political conspiracy, and they find themselves plunged into more danger than they ever imagined…

Tommy and Tuppence are broke and in dire need of money and so they come up with a plan to advertise themselves as the Young Adventurers who are willing to do anything, anywhere. I must admit when Tuppence came up with this idea I did think it was rather risky as they could be asked to do anything but it is the reader’s first introduction to Tuppence’s impulsive and adventurous nature.

Tommy is a lot more reserved than Tuppence and does tend to think before he jumps but that doesn’t mean he shirks away from adventure and gets into a fair few scraps in this story as does Tuppence.

Tommy and Tuppence find themselves hunting for the mysterious Jane Finn and they must find her in time to stop a major political catastrophe or possibly even war. This leads them into danger and not knowing who to trust.

I must admit that at the beginning I really couldn’t put this book down but then as I got further along my fervour waned. I will be honest I worked out who the illusive Mr Brown was rather early on and was frustrated with Tommy and Tuppence that they did not work it out sooner. The only surprise for me was the identity of Jane Finn but I loved the characters Tommy and Tuppence and I can’t wait to read further novels about them. This was only the second book Christie wrote and I can see this within the book as it lacks maturity in the writing. I give this book 3 out 5 Dragons.

Goodreads Monday is hosted by Lauren’s Page Turners.  All you have to do is show off a book from your TBR that you’re looking forward to reading.

I am actually teaching this morning, I don’t usually teach on a Monday, so this will make a nice change and it will be good to see one of my students that I haven’t seen for ages, even if it is only on Zoom.

My chosen book to feature today is actually the first book of a series that one of my friends recommended to me and one that I promptly bought but have not got around to reading but I hope to soon.

Rivers of London by Ben Aaronovitch

Probationary Constable Peter Grant dreams of being a detective in London’s Metropolitan Police. Too bad his superior plans to assign him to the Case Progression Unit, where the biggest threat he’ll face is a paper cut. But Peter’s prospects change in the aftermath of a puzzling murder, when he gains exclusive information from an eyewitness who happens to be a ghost. Peter’s ability to speak with the lingering dead brings him to the attention of Detective Chief Inspector Thomas Nightingale, who investigates crimes involving magic and other manifestations of the uncanny. Now, as a wave of brutal and bizarre murders engulfs the city, Peter is plunged into a world where gods and goddesses mingle with mortals and a long-dead evil is making a comeback on a rising tide of magic.

Please drop me a comment if you have read this book or the series, I would love to hear your thoughts. Plus please drop a link to your Goodreads Monday and I will head over for a visit.

I hope everyone is having a good weekend so far. The Grand Prix has now restarted so that will now be on most weekends in this house but I don’t mind as I get more reading done whilst it is on.

So what have I been up to on the blog…

I’m enjoying this but I am finding it rather slow in comparison to other Agatha Christie stories I have read.

Another quiet week for me on the blog front. I am currently doing a lot of reading for my Masters and that is taking up more of my time.

I hope everyone has a wonderful week.

I hope everyone has some good plans for the weekend.

My chosen poem this week is by Thomas Hood who was a Victorian poet.

For generations, the solar system – Mars, the Moon, the Asteroid Belt – was humanity’s great frontier. Until now. The alien artefact working through its program under the clouds of Venus has emerged to build a massive structure outside the orbit of Uranus: a gate that leads into a starless dark.

Jim Holden and the crew of the Rocinante are part of a vast flotilla of scientific and military ships going out to examine the artefact. But behind the scenes, a complex plot is unfolding, with the destruction of Holden at its core. As the emissaries of the human race try to find whether the gate is an opportunity or a threat, the greatest danger is the one they brought with them.

Another fantastic book in The Expanse series. I can’t believe how they just keep getting better and better with each book in the series. This one I could not put down.

As usual each chapter is from a certain character’s perspective. The four characters are Anna, Bull, Clarissa and of course Holden. Now my favourite character has always been Amos but Anna was a brilliant character and very different from Amos.

Anna is a pastor and has been chosen to go on an Earth ship with other religious leaders and important people to look at the alien artefact. Anna lives by the code act first, ask for forgiveness later and I must admit this does get her into some dangerous situations but if she believes something is right and just she fights for it and will do anything to protect her flock and others.

Bull is an Earther but works for Fred Johnson. Bull knows how to run a ship and knows how to get a job done. I loved how Bull gained respect from the Belters and got those who didn’t respect him to at least obey him. He might be rough around the edges but he always does the right thing.

I don’t want to say much about Clarissa as I don’t want to spoil anything but I will say she is a very troubled woman who desperately needs help and somebody to love her.

This book revolves around the alien artefact and shows the human race at its best and its worst. I wish there had been more of Alex and Amos but hopefully there will be more of them in the next book. I give this book 5 out of 5 Dragons.

Reviews in the series so far