Star Trek The Next Generation Cats by Jenny Parks

Jenny Parks is a scientific illustrator that also happens to be a shameless nerd, with a penchant for drawing animals, dinosaurs, imaginary creatures… and occasionally, people as cats. Somehow, she found herself with a bit of internet fame with the illustration ‘Doctor Mew’, and has been baffled ever since. With a BFA in illustration from the California College of the Arts, and a graduate degree in Science Illustration from UC Santa Cruz, she now resides in Denver, CO as a freelance illustrator, fulfilling her destiny to make a living drawing cute, fuzzy things.

The cats are back in their continuing mission: to boldly go where no one has gone before. This companion to the bestselling Star Trek Cats brings the many adventures of Star Trek: The Next Generation to life in a faithfully feline homage to the hit series. From encounters with the Borg to adventures on the holodeck, Captain Picard and the rest of the U.S.S. Enterprise NCC-1701-D crew are reimagined as cats with lovingly detailed and eyebrow-raising scenes from throughout the award-winning series, perfect for Star Trek fans across the Galaxy.

I was so excited to see there was a sequel to the Star Trek Cats and that this book was just as good as the previous one. The first thing I loved was the choice of cats for the characters especially the choice of cat for Captain Picard.

The book is like the previous book where it does not follow a story but instead has snapshots from different episodes. I have some favourite scenes which include Relics where the cats are kittens. My ultimate favourite is where the cats are playing poker and I must admit I would love to have it as a picture on my wall. However, I must admit the Borg cats are a little bit scary.

I love this book and I highly recommend it to other Star Trek and cat fans. I give this book a big 5 out of 5 Dragons and I thoroughly hope Jenny Parks does Star Trek Voyager soon!

Lyra loves the book as well! 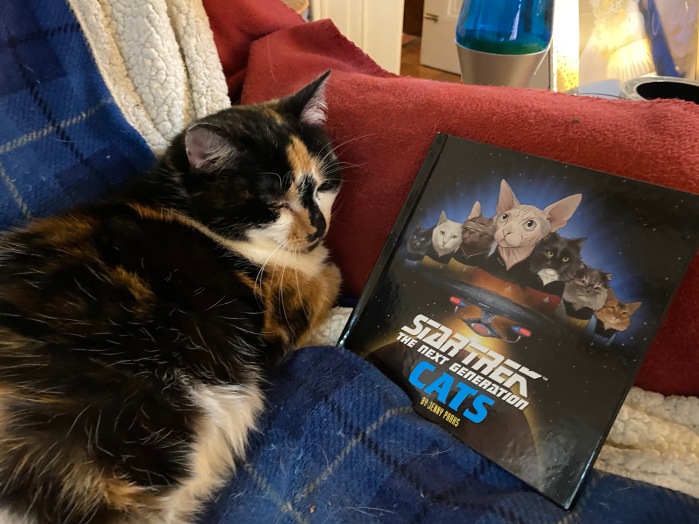