The Lantern Men by Elly Griffiths

Elly Griffiths was born in London and began her career in publishing, she then turned to writing full time. In 2016 she won the CWA Dagger in the Library for her work. Griffiths lives in Brighton with her family and the cat Gus.

Everything has changed for Dr Ruth Galloway.

She has a new job, home and partner, and is no longer North Norfolk police’s resident forensic archaeologist. That is, until convicted murderer Amyas March offers to make DCI Nelson a deal. Nelson was always sure that March killed more women than he was charged with. Now March confirms this, and offers to show Nelson where the other bodies are buried – but only if Ruth will do the digging.

Curious, but wary, Ruth agrees. March tells Ruth that he killed four more women and that their bodies are buried near a village bordering the fens, said to be haunted by the Lantern Men, mysterious figures holding lights that lure travellers to their deaths.

Is Amyas March himself a lantern man, luring Ruth back to Norfolk? What is his plan, and why is she so crucial to it? And are the killings really over?

Firstly, I will be honest and say that I am a Dr Ruth Galloway addict. I haven’t read all of the books yet but I try and buy a new book as a treat to myself as often as possible. This one is book 12 in the series and was a massive surprise to me because it has moved on quite a bit from book 11. Ruth now has a new job, a new house and is now with a new partner. This was quite a shock for me after where book 11 left Ruth but a nice surprise.

Ruth is her usual self in the book and now she has what appears to be the dream life but as you read it you can’t help but wonder if she is really happy?

Nelson is trying to solve a murder case where the suspect March is already in prison but will not admit to being guilty of the murders. He later agrees to tell Nelson where other bodies are if he talks to Ruth. Ruth agrees which leads to Ruth and Nelson working a case together again.

As the case developed I must admit I did not see the end result coming and it was a massive surprise how it turned out. What didn’t surprise me was what happened at the very end of the book.

One of my favourite characters in the Dr Galloway series is Cathbad and I must admit I would have liked to have seen a bit more of him in the book. I always love a Cathbad ritual of some kind and sadly that was lacking in the book.

Overall, I absolutely loved this book and could not put it down. I give this book 5 out of 5 Dragons and highly recommend it to all crime and thriller fans.

(All purchases made using one of the above affiliate links gives a small percentage of money to myself with no extra cost to yourself. All proceeds go towards the upkeep of this blog. Thank you) 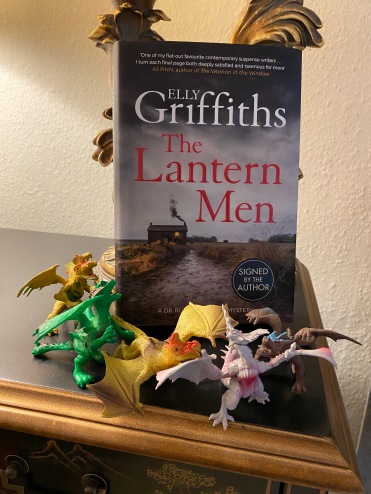