Members Only by Jeffrey Archer 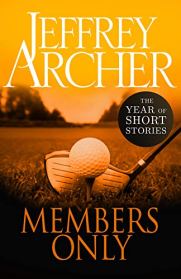 The course of Robin Chapman’s life changes forever when he is inspired to take up golf when he receives a golf ball in a Christmas cracker. Playing for his local club he visits Jersey and there he falls in love twice, with a local women and with the idea of becoming a member of the Royal Jersey Golf Club. However, his quest to become a member is far from straightforward, there is a long waiting list and then the Second World War threatens to wreck his goal completely . . .

This short story is part of the series of short stories that Jeffrey Archer has been doing, he has written one for each month of the year and this story is September’s. I discovered Jeffrey Archer’s work this year and promptly became hooked. When I got my Kindle I went looking for all the free books and discovered Archer’s short stories and downloaded them all and I have been reading them over breakfast each morning.

This short story had me slightly worried to start with as it mentioned golf, I am not at all interested in golf and I thought if it was mainly about golf I would probably struggle to stay interested. However, I am so pleased I did not give up as it was a really good feel good read that put a smile on my face and thankfully was not mainly focused on golf.

The main character Robin Chapman is a hard working man, who strives to make his father’s family business a success, but also strives to be a good golfer. His quest to join the Royal Jersey Golf Club influences him in most things that he does and his wife also suggests things to help and puts up with his mad ambition to join. Robin never gives up and does not let anything stand in his way, he hopes with persistence and patience he will get what he most desires.

Archer has written a beautiful little story here, that is fast paced and engrossing. His two main characters Robin and his wife Diana are real life and believable, Diana the long suffering wife, supporting her husband’s mad ideas and plans, but also keeping her own career going, and also coping with the worry of her husband when he is doing something dangerous. Robin, who is a genuine good guy, helps his fellow man, works hard and is a loving husband and father. Archer fits so much of these two people’s lives into this short story, you do not realise it is a short story until you suddenly reach the end. Archer’s beautiful writing shines through in this short story and I thoroughly enjoyed reading it.

The rest of the book was a sample of his next book Heads you Win, I did not read this as I have had this book preordered for some time and it arrived last week, so I did not want to spoil the surprise.

If you have a spare minute I highly recommend sitting down with this short story, putting your feet up and having a good read.