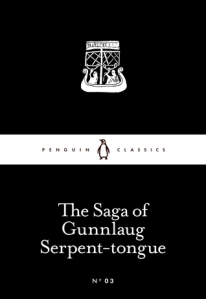 The author is sadly anonymous but this is a well known Icelandic saga composed at the end of the 13th century.

Ranging across Scandinavia, England and Ireland, a Viking-age epic of two poets in doomed pursuit of Helga the Fair

This is the third book of the Penguin Little Black Classics and a quick little read of just 52 pages. The book contains 25 verses of skaldic poetry which are scattered through the story.

This book is essentially a love story, where two poets are in pursuit of Helga the Fair, both travel around earning glory and renown hoping to make themselves worthy of Helga’s hand in marriage.

I enjoyed this book to begin with and found the verses of poetry enjoyable, however as the story went on I found the poetry began to get on my nerves and broke up the flow of the story. I must admit I started to skim read it as I could not bare it any longer, the story was still really good though. The thing I found a struggle to get used to in the beginning was the big lists of names, but once I got used to the style this was ok. A lot of store is held in one’s ancestors and family in this book so great lists of names are often given, even if those characters are not featured in the story.

I also enjoyed how the characters travelled around Scandinavia, England and Ireland and the accompanying adventures. It was interesting learning about the kings and rulers of that time and what they were like. The other element I enjoyed was how Christianity moved across the countries and the old ways were forgotten. This was considered a really good thing in the book but I wonder whether everyone was so willing to drop the old ways and take on the new faith. In my opinion I think this element is seen through rose tinted glasses by the author.

“All the men who have been mentioned were living at the same time, and it was about this time that the best thing ever to have happened in Iceland occurred: the whole country became Christian and the entire population abandoned the old faith.”

This is an excellent little book, which will not take long to read and was a good introduction for me to Icelandic sagas. I enjoyed reading the book but because the poetry got on my nerves I only give this book 3 Dragons out of 5.